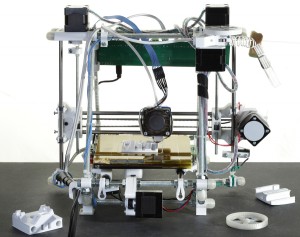 What’s on your desk when you come to the office every day? A computer? Writing tools? Pictures of loved ones? What about a 3D printer?

Those first couple of items adorn the desks of most professionals, no matter what field they are in. And you’ll see the same tools o the desks of engineers as well. However, while engineers certainly have a need for 3D printers, there are precious few who have such technology in their offices. And even fewer who have them at their desks.

That needs to change.

Just as the idea of having a computer at every work station was inconceivable a generation ago, we can no longer afford to discount the importance of having access to 3D printing capabilities in the office environment for those that need them.

Some forward-thinking companies are already making the upfront investment to expand 3D printing capabilities in their office space. Those that have moved to adding 3D printers to individual work stations are finding they are saving money with individual units when compared to central printing hubs. That’s thanks to the reduced price of supplying desktop 3D printers with filament compared to their larger counterparts.

Other companies remark that adding 3D printers to their engineers’ work spaces has encouraged their staff to be more creative and try out new ideas they may have never considered officially printing otherwise. Engineers with 3D printers at their desks are essentially using the tool as their sketch pads, just as their colleagues used a pencil and paper a generation ago. And as any engineer knows, sometimes the greatest ideas are spawned by from the simplest ideas.

So are we headed for a day when 3D printers adorn the desk of every engineering workstation? Eventually yes, but you probably don’t need to clear a spot tomorrow. It’s an exciting prospect nevertheless because an increased mainstreaming of 3D printers represents growth for our industry as well as yours. Here’s to your new workmate, we look forward to see what you come up with together.