When I was a child one of my favorite television shows was The Jetsons. It’s 1980s revival was smack in the middle of my formative years and I would hum along as George Jetson dropped his family off at their chosen destinations for the day on his way to work.

The Jetsons were our prognostications for the future given animated life. They flew around in wheel less cars, lived in the sky, had robot maids and ate food that was quickly created in a machine. The show originally aired in the 60s and nearly 50 years later we still don’t have those flying cars, sky way homes and robot maids, but food made by machines? Well, one out of four isn’t bad. 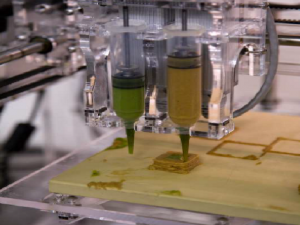 Today the United States Army is seeking new ways to manage its food supply lines while customizing nutrition and it thinks it’s found a way to make food Jetsons style, through the power of 3D printing. “Food could be printed with the exact requirement a warfighter needs,” Lauren Oleksyk, a food technologist who works at the US Army’s Natick Soldier Research, Development and Engineering Center told Tech Insider.

It sounds impossible, the stuff of, well, The Jetsons but Oleksyk believes the quick manufacturing of food, using 3D printing is not only possible, it’s doable within the next 10-15 years. In fact, it’s prognosticated that by that time our soldiers will be outfitted with devices that measure not only their physiological status but their nutritional status as well and these measurements would be delivered to the solider so he or she was aware of their current status.

The information collected by these devices will then be returned to base as well where officials could use it to print dietary solutions that will correct any deficiencies the soldier is currently showing. The data would also allow them to alter their food printing choices based on the physical body composition of the solider.

Using today’s technology simple foods like peanut butter filling can be made in half an hour but as the technology improves experts expect 3D printers will be able to tackle more complex foodstuffs while also printing simple food stuffs in less time. And once we master the art of printing food bars, can George Jetsen and his flying car really be that far behind?