Halloween is still seven months away but here’s a scary story for those of us in the 3D printing industry. New research from a team at the University of California at Irvine, has discovered that it is possible to recreate a 3D printed model solely by making an audio recording of the machine during the creation process. 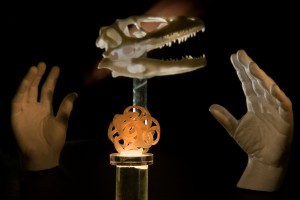 It sounds like an espionage tacit from a bond film but Professor Mohammad Al Faruque, who headed up the project, insists stealing a 3D printed design solely by recording the sounds made by the extruder’s movements is possible. And he’s done it, working with his team to record a 3D printer’s process, they were able to replicate the same design with an accuracy rate of 90 percent.

The effect on the 3D printing industry

For those of us with a 3D printer in our home, the threat of someone making an audio recording of our printer’s work and thereby stealing our design is likely not that great. It’s also easily protected against. This is not the case however for companies that may have several employees working around a 3D printer every day – each of them with a smart phone capable of recording audio at a quality necessary to possibly replicate the design.

So how can companies protect themselves?

Prohibiting smart phones and other recording devices from areas around 3D printers is a logical solution but also one likely to be protested by employees. A second, simple solution may be to add additional noise interference to the area. Even something as common as a white noise machine could be sufficient to muddy the audio quality and make picking out the exact sounds of the printer impossible.

As 3D printing technology continues to improve, the machines are likely to get quieter. That’s good news in the long-term but for now we’re left with the potential for stolen secrets via audio recordings. Fortunately thwarting this crime is very doable so while the threat may be a little scary, it doesn’t have to give you nightmares.